The global supply chain is not expected to emerge for several months from the turbulent zone it entered in 2021, due to the explosion in demand driven by a sharp increase in consumption in Europe and the United States. The economic outlook for an increase in world trade in goods for 2021 is + 11.4%.

The Covid 5th wave comes to play the spoilsport and should extend the Peak Season out of Asia.

The last 18 months have seen the freight market at its most turbulent in living memory.
Rates and schedules, capacity, and conditions have all been changing on a seemingly daily basis, forcing shippers to become more flexible and agile.

The situation is complicated for shipments out of China, the main manufacturer of Covid-19 detection tests.
The holds of many planes bound for Europe and the United States are filled with these tests because buyers in Western countries are ready to pay a high price for this scarce commodity at the start of a new wave.
This forces other importers to pay more to access the capacity

Medical factories in the Shanghai region have their order books full until March 2022.
Therefore, the Peak Season is expected to last until the end of Q1 2022.

There is also a 40% drop in flights because companies are encouraged to cancel their commercial flights in order to charter them to the highest bidder.

As for the imports from Hong Kong, bad news has just been announced by Swiss who explains that the unexpected development of the Covid-19 on the spot forces them to suspend their operations in Hong Kong for this week at least. Air France has announced the same measure, other companies should follow ...

The next few months were shaping up to be a return to normal for the airline market, but this 5th wave has turned everything upside down.
Many countries are starting to close their borders and others are expected to follow suit.
A closed border means fewer thefts, more complicated access to capacity, and therefore skyrocketing rates.

Currently, major European and Chinese forwarding agents are in full negotiation for their BSA of 2022.
For the moment, the negotiated rates are identical to those of 2021, which leads us to believe that the big players of the market expect such the complicated year 2022 than in 2021. 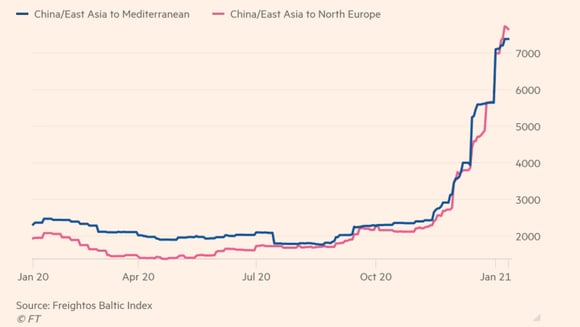 LA and LB California ports are delaying imposing fines on the carriers for idle containers awaiting pick up, saying that there has been a significant improvement in the supply chain since last month.
The executive directors of the ports said in a joint statement that since the announcement in October for the compounding fees, the two ports have seen a tremendous decline of 33% in aging cargo on the docs.

This end-of-year period promises to be once again special for global supply chains, with the usual peak season adding to the various tensions experienced throughout the year. 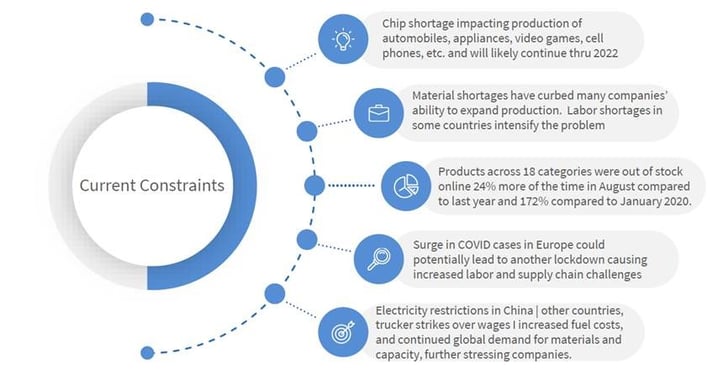 The key point is the congestion at major European airports. Handlers are under pressure because of the very large volumes of freight received recently, while the shortage of handlers is not going away. It is, therefore, necessary to wait several days to recover pallets from the warehouses.
Rates out of China currently remain stable. The major airlines were in a meeting on Monday to decide on their pricing strategy for the coming weeks. Changes should take place in the coming days.

However, and like every year, rates should go up until December 15th, which marks the end of the last Christmas shipments. There might be some rates adjustments until the approach of the Chinese New Year.

According to a recent study conducted by DHL Global Forwarding, the current characteristics of the air freight market (i.e. high rates, a slow recovery in capacity, and service disruptions) are expected to continue in 2022, in a context of uncertainty surrounding the market.
Over the coming year, demand is expected to remain "robust" while at the macroeconomic level, global Gross Domestic Product forecasts point to solid growth. Certainly, with manufacturers busy restocking, the demand’s level might remain very high. Yet, the prospect of further Covid-19 closures, pandemic-related restrictions at airports, such as those currently in place for departures from Asia, as well as the resurgence of coronavirus cases in Europe, means the return to normal is still a long way off.

Prices are expected to remain at high levels compared to 2019, as overall capacity growth is expected to be lower than demand.

Sea freight rates continue to be extremely high, compared to 2019 prices, due to capacity shortages and an increasing demand.

TRUCKING IN THE USA

The industry is still about 33,000 drivers shy of pre-pandemic levels. Besides, a total of 3,874 (13.5%) trucks were placed out of service in the recent Brake Safety Week organized by the Commercial Vehicle Safety Alliance. The US, Canada, and Mexico worked together to inspect 35,764 trucks this year.

Across North America, 12% of the commercial motor vehicles inspected were placed out of service for brake issues alone.

The global supply chain is not expected to emerge for several months from the turbulent zone it entered in 2021, due to the explosion in demand driven by a sharp increase in consumption in Europe and the United States. The economic outlook for an increase in world trade in goods for 2021 is + 11.4%. Standardization will take time. According to IMF forecasts, global growth will be more moderate in 2022, but it is still expected to reach 4.9%.
Trade-in goods will also continue to expand, although again growth will weaken. The tensions observed in the supply chain should therefore subside, but they will not disappear and transport prices will remain at high levels.
(source Upply 24/9 -)

This summer, air cargo capacity fell by 13% between July 27 and August 9, compared to the same weeks in 2019.
This second quarter showed a mixed recovery in air cargo capacity, most trade routes still being well below pre-pandemic levels. Load factors and yields remained at historically high levels during the last quarter, despite the reduction in capacity, the increased proportion of capacity by freighters contributed to this.
As far as air imports are concerned, Asia-Pacific, North America, and Europe are showing the strongest recovery, with more than one million tons of additional air cargo in the past three months.
There is also an overall change in freight density which has increased since the start of the pandemic, in part due to a change in demand. In terms of capacity and tariffs, due to the COVID-19 policy in Asia and the countries of the sub-Indian subcontinent, there is a large number of cancellations and prices have increased sharply, especially at the beginning. of the high season. The operator of one of the busiest ports in the world has suggested that global supply chain bottlenecks will last for around two years.

Experts expect bottlenecks to continue until 2023 and warn that the issues will result in higher costs for shipping goods.
Some analysts and other port operators have said that supply chains are struggling to keep pace with demand and deal with labor disruptions due to the COVID-19 pandemic, lockdowns, and quarantines.

The world’s largest shipping firm, A.P. Moller-Maersk, warned that bottlenecks could last longer than anticipated.
“There have been many challenging periods over the years, but the situation over the last 12 months is unique, in as much as it has had a global impact. All continents are seeing high volumes and operational challenges, restricting both ocean and land-side capacity at the same time,” Maersk said in a mid-September update.

Last week, several industry groups that represent truck drivers, shipping workers, and airline workers issued a warning to the U.N. General Assembly that governments need to work toward improving freedom of movement relating to trade.
They warned of a “global transport system collapse” if nothing is done and suggested that “global supply chains are beginning to buckle as two years’ worth of strain on transport workers take their toll,” according to an open letter.
It was signed by the International Air Transport Association (IATA), the International Road Transport Union (IRU), and the International Transport Workers’ Federation (ITF), which represent some 65 million transport workers around the world. 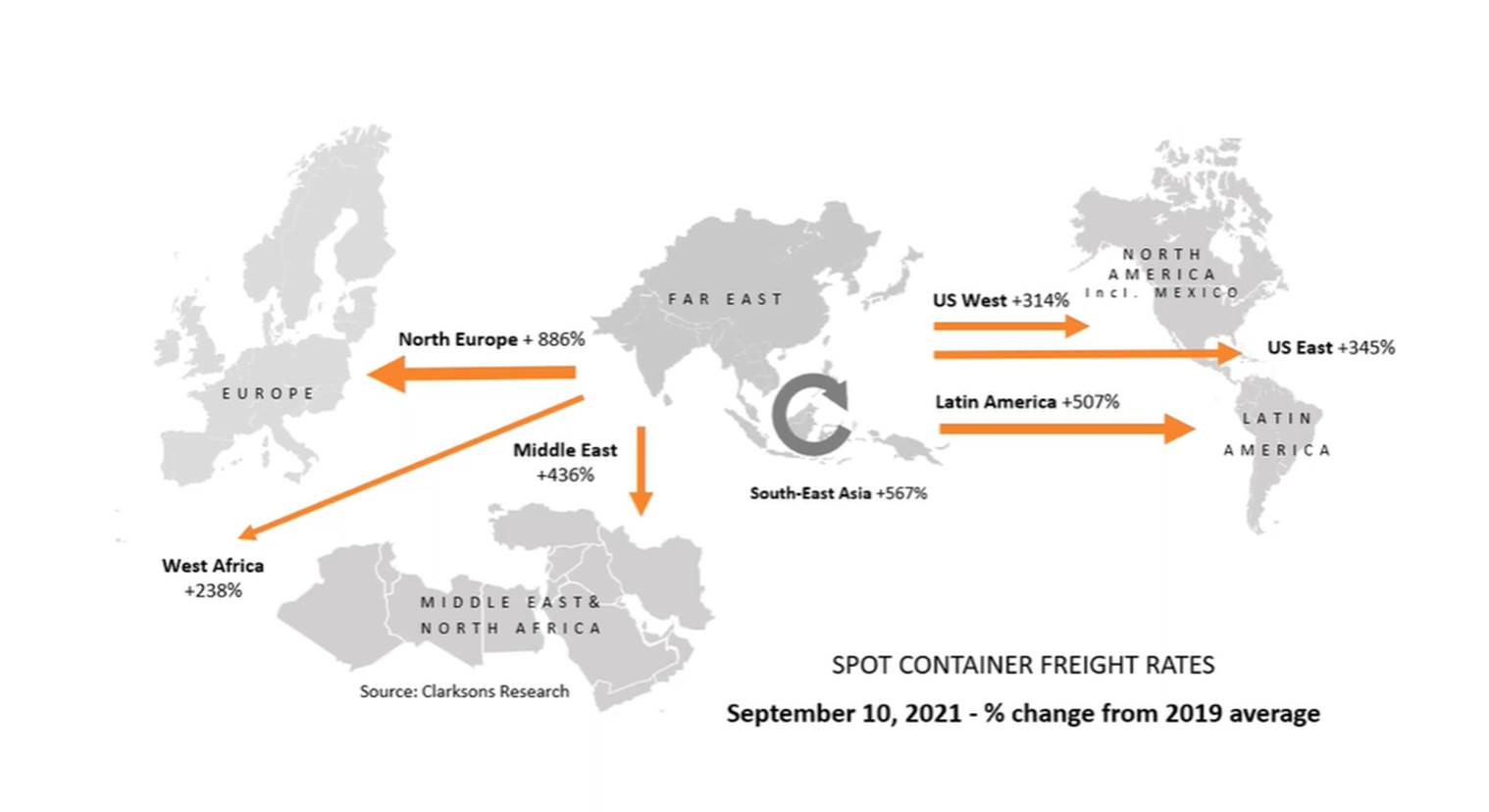 Factories in some of China's most industrialized provinces (Jiangsu, Guangdong, and Zhejiang) either cut production or shut down temporarily this month after power cuts imposed by the government to reduce emissions of carbon.
These measures are likely to further increase the delay in receiving containers in the short term at the ports of Shanghai, Ningbo, and Shenzhen.

How does your EMS partner ensure quality and reliability?

A manufacturing process for quality