The question of the future evolution of maritime freight rates agitates observers, while the tariff peak has been exceeded and a “muted” peak season seems to be occurring.
The beginnings of a consensus are emerging: prices should continue to fall, before stabilizing at an intermediate level (between the historic low before 2020 and the record highs of 2021).

If demand returns to standard levels, port and land congestion in Europe and the United States is a concern because they persist despite the drop in volumes in circulation and have a negative impact on capacity.
Abnormal retention of empty containers is observed in Europe, where the drought also limits river traffic.
The German ports, but also Rotterdam and Antwerp, are in the red.
Fewer empty boxes sent back to Asia has serious consequences on the fluidity of the East-West trade lane.

Between high inventories, inflation and consumption redirected towards leisure and services, the pressure on air freight continues to decline.
As a result, seasonality phenomena are reappearing after two extraordinary years.
Currently, the sector is going through the traditional weak summer season, before a probable moderate peak season at the start of the school year.
But in such an unstable economic and geopolitical context, forecasting remains a risky exercise.

On the side of certainty, the decrease in air freight rates continues: the TAC Index posted a sharp decline last week (-5.5% in China-Europe).
In Asia, observers are reporting significant rate cuts, albeit still at levels around 15% higher than in 2019.
Airfreight rates on key trade lanes were stable in July for the quieter summer period but remain far above pre-pandemic levels.

The latest data from the Baltic Exchange Airfreight Index (BAI) show that average rates on services from Hong Kong to North America dropped by 2.6% in July.
However, rates on the trade are up 7.5% on the year-ago level and far ahead of the rates recorded for the month in pre-pandemic 2019.
There was a similar trend in services from Hong Kong to Europe where rates in July increased by 1.3% in June.
But rates on the trade are up by 38.4% compared to last year and are much higher than those registered in July 2019.

The flattening of rates compared with a month ago reflects the seasonal summer slowdown ahead of the peak season towards the end of the year. 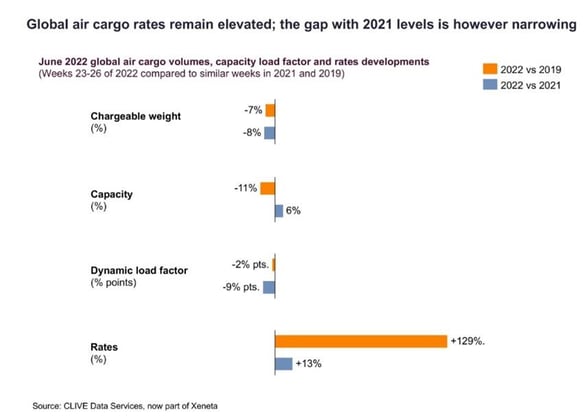 Transportation rates are expected to stay above pre-pandemic levels for the foreseeable future despite the recent slowdown in demand. This slowdown has been caused by rising inventory levels, inflation, and the return of spending on services as opposed to goods in certain sectors.
However, the industry is likely to experience a peak season this year, and volumes are still ahead of pre-pandemic levels -supply chain disruptions continue.

Despite a slowdown in demand compared with the last two years, rates are likely to stay at an elevated level due to supply chain disruption caused by labor shortages, possible Covid restrictions, capacity shortages, the war in Ukraine, and ongoing port/airport congestions.

Besides air cargo capacity will be reduced when the summer travel season comes to an end.

It is highly suggested to advise clients not to expect rates to revert to pre-pandemic levels in the short-, medium, or long-term.

And it is important to take that into consideration when thinking about next year’s budgets.

The summer peak season is finally looming, but very timidly (freight rates stabilized this week, according to the World Container Index). Several observers, but also the company Maersk, believe that demand could quiver in August.

In the meantime, consumption is slowing down and so is maritime traffic. This has made it possible to partially reduce port congestion, especially in China. On the other hand, it continues to worsen on the East Coast of the United States and in Europe. Some even believe that congestion is now more serious in certain European ports than in California…

As a matter of fact, in Hamburg, Antwerp, Rotterdam, or Le Havre, boxes are piling up and no one sees the end of the tunnel.
In the question: a lack of truck drivers and disruptions on the rail or river networks.
In France (Le Havre and Fos), Hapag-Lloyd has even added a €25 congestion surcharge since July 1st to try to speed up the pick-up of waiting containers.
Finally, the phenomenon is aggravated by the low punctuality of ships (barely a quarter of them arrive on time from Asia)...
Summer will be hot in Europe!


Besides, in the wake of a breakdown in negotiations between employers and the union, 12,000 dockworkers in the German ports of Bremerhaven, Wilhelmshaven, and Hamburg have gone on strike.

In just a matter of a few weeks, the German ports are now bracing for a third strike as a dispute over wage increases continues to threaten the cargo operations in all major Northern ports including Hamburg, Bremerhaven & Wilhelmshaven.
The strike started on July 14th, 2022 was scheduled to continue until Saturday, July 16, 2022.
This 48-hour strike came after the sixth round of wage negotiations ended without a result.
The continued port congestion has impacted the rail lines leading them to cancel services in & out of the ports thus further straining the traffic via Germany’s main ports.

In the USA, rapidly approaching peak numbers, the pileup of import containers waiting on Los Angeles and Long Beach terminal yards is getting out of hand.
Having just crossed the number of days (nine) that the import containers can sit on the terminal, Long Beach has crossed a red line that could result in Container Dwell Fees being applied should things continue the way they are.

Many had expected the opening up of Shanghai and Hong Kong following strict Covid lockdowns to result in a surge in rates from Asia as factories played catch up following months of closure.
However, TAC Index figures show that rates actually declined marginally in June compared with May from Hong Kong to Europe and North America and from Shanghai to North America, while there was only a slight increase from Shanghai to Europe.

Air cargo demand actually declined compared with a year ago for the fourth month in a row in June, according to the latest statistics from CLIVE Data Services.
Figures from the same source show an 8% year-on-year decline in chargeable weight in June, following on from drops in March, April, and May. 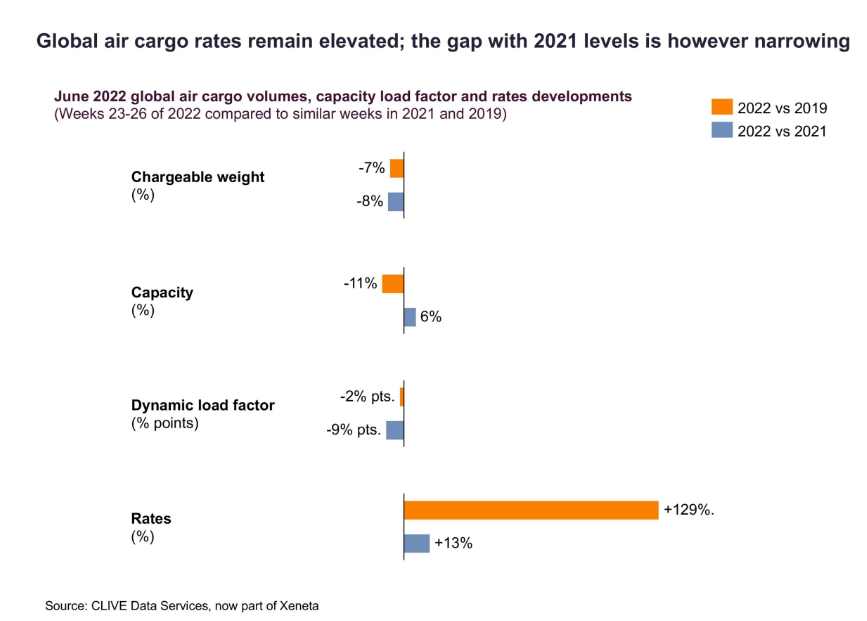 The dynamic cargo load factor – taking into account weight and volume – for the month was nine percentage points behind last year at 59%.
The load factor decline comes as demand fell and carriers continued to add capacity – up 6% on last year – to cater to returning passenger demand.
Despite the weakening supply and demand conditions, rates for the year were up 13% compared with the same month last year, although there was a decline compared to May.

Most experts predict that global port congestion is set to continue until at least early 2023 and keep spot freight rates elevated.
The COVID-19 outbreak has lengthened ship delivery times since 2020, pushing up freight costs, while the Russia-Ukraine conflict and lockdowns in Shanghai have added to supply chain disruptions this year.

Rotterdam is filling up with empty containers, creating an even bigger shortage in Asia, and causing more backlogs that are slowing down the ports.
The Dutch port is unable to deliver goods at the export hub, forcing ocean carriers to prioritize shipments of filled boxes, adding to the problem.
Cargo must be booked at least one month in advance.
Overall, major ports around the world are more or less congested, which creates long-term supply chain bottlenecks. 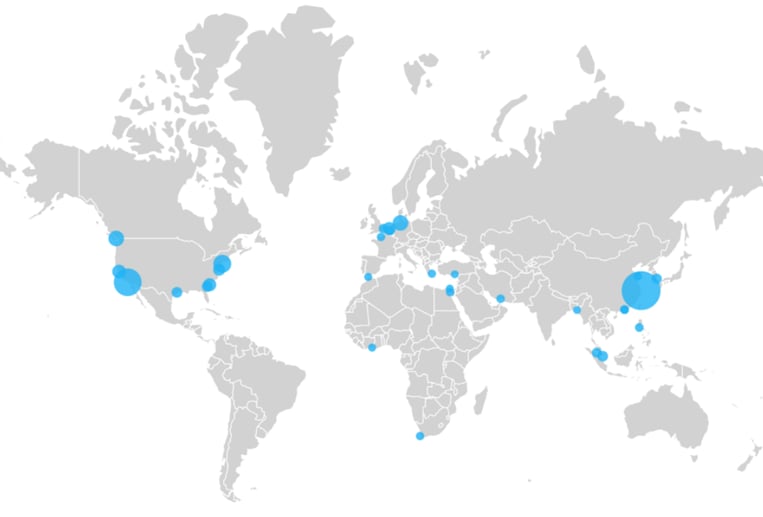 The European Commission (EC) is urging the air cargo industry to prepare for new rules that from March of next year will require the submission of advanced shipment information before air cargo is loaded.

The EC said that the new rules mean that all freight forwarders, air carriers, express couriers, and postal operators transporting goods to or through the European Union (EU), including Norway and Switzerland, will be required to submit in advance cargo information in the form of a complete entry summary declaration (ENS) as part of the second phase of the new customs pre-arrival security and safety program – Import Control System 2 (ICS2) Release 2.

The EC said that companies are strongly advised to prepare in advance for Release 2, in order to avoid the risk of delays and non-compliance.

The information previously needed to be submitted four hours before arrival, but will now need to be input before shipments are loaded onto an aircraft.
To help prepare for the introduction of ICS2 Release 2, the European Commission will make available a conformance testing environment from July 2022 until February 2023, to be able to verify the economic operator’s ability to access and exchange messages with customs authorities through the intended ICS2 trader interface.

A Day in the Life of Marwa Charfedi - Program Manager