The outlook for air cargo market over the next few months remains uncertain.

Economic pressures and the easing of ocean freight congestion mean airfreight growth next year might be difficult: airfreight received a boost in the last two years because of the incredible mess on the ocean side, but shippers are now likely to feel more comfortable moving back to ocean from a reliability and pricing point of view.

As a matter of fact, rising belly capacity and freighters coming to the market mean ample capacity and the only development   that would slow down the decline in rates is supply on the ground: if airlines and cargo handling companies continue to struggle to hire people and remain short-staffed, then the bottlenecks will create an upward pressure on rates because it will be difficult to get goods through the value chain.

Airfreight rates on top volume corridors from Asia to Europe and Asia to the US continued to fall in October, while general rates fell more substantially on inbound US corridor routes than inbound Europe. This is attributed to added costs for EU routes, due to the closure of Russian airspace and lower spending by US consumers. 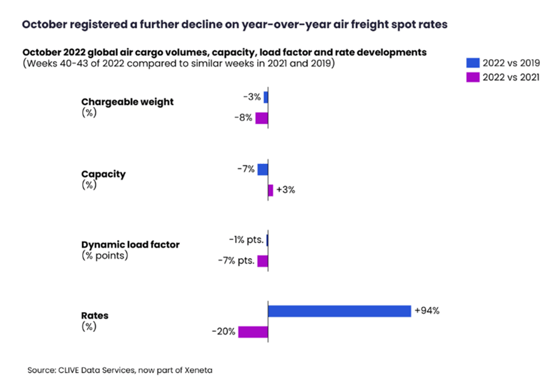 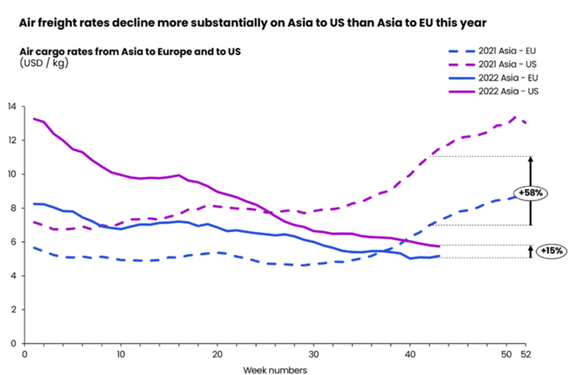 The shipping companies are seeing a slowdown in demand for space for goods leaving China for Europe.

High stock levels and the absence of visibility regarding future prospects are paralyzing business activities.

Since the beginning July, ocean freight rates on Asia-Europe routes have been falling after a period of strong increases.

This is the result of a fall in demand which has several different causes.

Of course, high inflation is starting to weigh on household spending and, by the same token, on consumption levels.

But the low level of new orders from the retail sector is also due to high stock levels.

At the same time, the absence of visibility regarding the outlook for the economy in the months to come has literally frozen decisions on new orders.

Retailers do not want to risk accumulating more stocks, given the high cost and low availability of storage space.

The fall in rates continues but at a slower pace.

The transatlantic axis continues to swim against the tide.

However, there too, a semblance of normalization is taking shape.

Although strong, demand is slowing.

These measures can have several consequences, including:

It has been a tense time in the market which has seen an increase in capacity, against a drop in demand, while rates have started to soften.

Supply chain congestion has begun to ease, with ocean freight beginning to claw back business from airfreight.

Global economic strain, the continued impact of the Covid pandemic and Ukraine war have also dampened the industry.

Earlier this month, after IATA released its data for August, director general Willie Walsh said: “Air cargo continues to demonstrate resilience. Cargo volumes, while tracking below the exceptional performance of 2021, have been relatively stable in the face of economic uncertainties and geopolitical conflicts.”

The industry body’s data for August showed that capacity increased by 6.3%, while demand fell for the sixth month in a row, although the drop off wasn’t as steep as the month before.

The air freight market hovers over its paradox: while overcapacity is taking hold, rates are showing a certain stability, at levels that are still high compared to before Covid.

The average delay of container ships in the world in September is now 5.81 (-0.10 over a month). It was 8 days on average in January.

After getting used to the reverse, shippers are beginning to rediscover the pleasure of “just in time” with sea freight.

A notion totally shelved in 2021 and until recently.

But despite this undeniable trend, the overall fluidity of maritime transport still remains far from its pre-Covid level, although it has improved almost continuously since January.

This gradual return to “normal” is therefore relative, in this maritime landscape clouded with uncertainty.

The prospect of the next Chinese New Year (January 22, 2023) could stimulate (a little) the market and demand in the coming weeks, but nothing is certain.

Rates continue to fall, but at a slower pace for the most part.

Compared to 2019 levels, the evolution of global air freight demand in 2022 is expected to be around 13% as per Iata International Air Transportation Association).

The sector is expected to generate $169 billion in revenue this year.

Cargo volumes, while tracking below the exceptional performance of 2021, have been relatively stable in the face of economic uncertainties and geopolitical conflicts.

Demand for space on cargo ships and available supply appear to be coming more into balance, pushing rates down.

As the United Kingdom began its dark fortnight with a succession of strikes at the ports of Liverpool and then Felixstowe, container traffic is largely redirected to the main ports in northern Europe.

As a concrete consequence, the Container x Change analysis platform calculates that the Container Availability Index (CAx) has increased sharply in Bremerhaven and Hamburg (0.87), in Rotterdam (0.83) but also in Le Havre (0.89).

As a reminder, a balanced CAx (0.5) indicates the same quantity of boxes entering and leaving a port.

These redirected flows to Northern Europe come as the latter are still struggling to purge the empty containers accumulated in recent months. 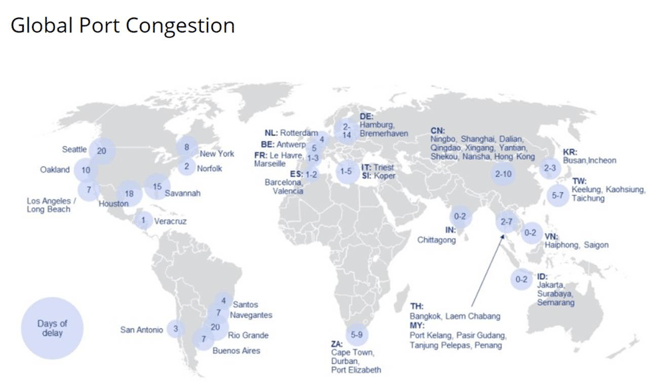